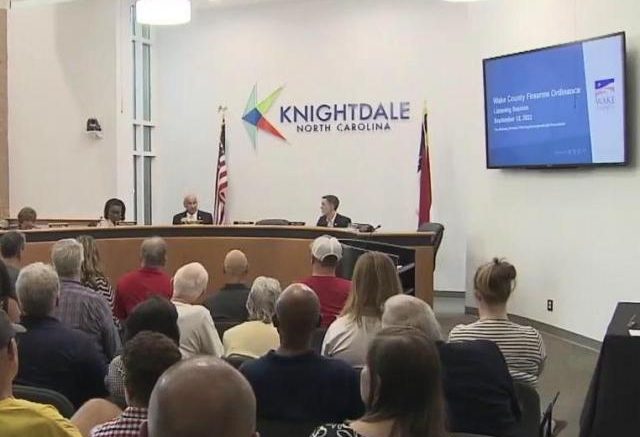 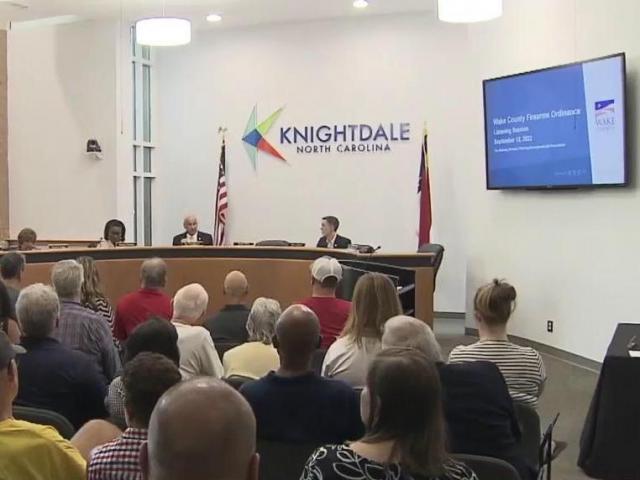 Knightdale, N.C. — Wake County residents for and against stricter rules for outdoor shooting shared their opinions tonight — just a week after Knightdale homeowners voiced their concerns over stray bullets hitting their homes.

It was a packed house inside Knightdale’s Town Hall Tuesday night.

Some showed up with passionate pleas for commissioners to leave the current Wake County outdoor shooting ordinance alone.

“I’m against this ordinance and I have several reasons,” said one speaker.

Then others stepped up to the podium making an appeal for changes.

Speakers were given three minutes to share their viewpoints, while the commissioners listened to 2 hours’ worth of statements.

Next, the County Commissioners will take the feedback they received today and they will have a planning session on September 19.

The county hasn’t updated its regulation for outdoor shooting in unincorporated areas in 20 years.

This new push for change comes after more than 100 complaints were made about shots fired in the Knightdale area. A handful of those bullets have hit homes and other property.

WRAL News spoke to Shannon Hardy, a Knightdale resident who said on two separate occasions bullets nearly missed her while standing outside of her own home. In one instance she was outdoors grilling with her family.

“This summer on July 19, we were in the backyard grilling, and I was with the dogs, and I happened to bend over,” described Hardy. “Right where I was — in the space where my head was — a bullet flew by along with other bullets, one hitting our neighbor’s fence.”

“At that point when that happens — two near-misses — you think, maybe I’m supposed to do something,” she said.

Since then, Hardy has met with other neighbors who share similar experiences and concerns about the recreational shooting in Knightdale.

Last week, the Wake County Board of Commissioners spent over an hour listening to residents’ reactions to the first reading of proposed changes.

One resident was too frightened to attend so she wrote a letter which was read by a friend. “I find myself worrying if my child is safe playing in the bedroom,” the letter read.

The proposed ordinance amendments laid out by the county include:

The commissioners agreed they need more time to review the amendments, which do not apply to hunting rules and regulations.

“More people who weren’t raised with guns now have guns, and they want to practice — I understand,” said Hardy. “But when shooting, if you don’t have a proper backstop, then you don’t really know where those go … they can travel,” she added.

Hardy is pleased the county is considering to raise the violation fees to $500.

“If the consequence is only $50, that’s less than the ammunition you’re actually using,” she said. “So one of the pushes for us has been greater distance from dwelling and the time of day that we don’t want people shooting. One-hundred rounds at 10 p.m. is very scary for a family.”

Some gun owners opposed the proposed amendments in the previous listening sessions.

Shawn Sorrentino with Grass Roots North Carolina, a gun rights organization, said the group takes issue with increasing the distance on where you can shoot a gun from 100 to 300 yards from a home.

“That kind of distance is insane,” said Sorrentino. “The amount of property you would have to have.”

Both sides did agree that the shooting in Knightdale needs to stop.

“Putting a bullet in your neighbor’s property is unacceptable,” said Sorrentino.

Hardy said the community is working with farmers, hunters, competitive shooters and more to determine the best scenario for everyone.

“I don’t want to sensationalize it because I don’t think any of this is with intention,” Hardy said. “I don’t think that people are trying to be reckless. I think we have to have a community conversation about how we can protect our Second Amendment rights to keep and bear arms, and at the same time, make sure our communities are safe and our children are safe.”